J. There would be too much new construction

These arguments are tricky, because a majority of people in the UK are NIMBYs (or at least, NIMBYs are far more vocal than those who are happy for other people to have new homes). They argue that they are doing it because they care about nature, local history or the catch-all 'pressure on local services'. But underlying it is the selfish interest in keeping house prices as high as possible, so they oppose LVT and new construction with equal venom - you are fighting on two fronts. Even if you could explain the underlying economic logic which tells us that LVT will take away the motive for building on The Hallowed Green Belt and allowing town centres to rot away, they would still oppose it.

Four typical arguments are as follows:

See also: Greedy developers will get planning permission for my land, forcing me to pay more.

The Home-Owner-Ists are of course perfectly capable of proposing equal and opposite arguments. In the next breath they will claim that with LVT there would not be enough new construction and they will round things off by saying that LVT would force people to live where they don't want to i.e. that with LVT, they would be too much new construction where it isn't wanted or needed and not enough where it is (or something like that, it is never clear what they mean).

Proponents of LVT do not have any sort of collective view on whether planning laws should be made stricter or more liberal. By and large, it is easier to assume that the power of local councils to decide what gets built where would remain in place. Quite simply, LVT works just as well, conceptually or administratively, whether planning laws are very restrictive or very liberal.

We are agnostic on the whole planning issue for the simple reason that with LVT, there would be far less need for new construction. Instead, more incremental steps would be taken to make best use of what we've already got - loft extensions, refurbishment, conversions, small scale developments, infill projects, replacing derelict buildings, building on vacant/under-used urban sites etc. Most importantly, some widows in large family homes would downsize so that young families can upsize. In 2011, the Intergenerational Foundation calculated that there were 25 million unoccupied bedrooms in the UK, i.e. about ten million homes' worth of bedrooms. All of this is great news for small, local builders and craftsmen, and will go down like a cup of cold sick with national land bankers like Taylor Wimpey, Redrow, Barratts et al.

Furthermore, with LVT in place, planning decisions would go with the grain of what people actually want anyway.

1. "All public parks/school playing fields will be sold off for development"

No they won't. Because LVT aligns the interests of the local council (who receive a share of the money) and the people who live there.

a) A few facts: most of us live in very developed areas, it's the natural sweep of history for people to become ever more urbanised, but it's still nice to live somewhere not too far from a playground, park, open woodland, a river or canal with a footpath and cycle path etc.

b) So it is obvious that the rental value of homes which are near such amenities, or even better, overlook them is higher. Here's a bit of first hand research on the premium which people will pay for an apartment with a better view.

Houses close to public parks or open spaces now cost up to £21,000 more, revealing a “green premium”. A survey by finance company ING Direct found that the price difference was higher in cities with less public space as it becomes scarce because of pressure on town halls to sell off land.

Rents are currently capitalised at 3%, so what that means is, the rental value of a house close to a park is £630 a year higher than otherwise.

d) OK, so let's imagine a nice little commuter village with five hundred houses all within five minutes walking distance of a nice big six-acre public park with all the bells and whistles. A bit like this: 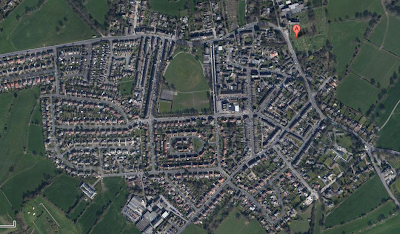 e) Notwithstanding that the park is the prime selling feature of that village and there would be riots if the council ever even mentioned selling it to developers, how many homes could you fit into that park? Probably around sixty. So now the local council can collect LVT from 560 homes. But the rental value of those 560 homes would not be £6,000 any more, it would be 15% less = £5,100. Times that by 560 and the council only gets £2,856,000. So the council has no incentive to sell off the park.

f) Now, we also now that under current rules, a developer could make a huge windfall capital gain (at everybody else's expense) by building 60 homes on that park, all he has to do is hand over some brown envelopes to the right councillors. With LVT in place, there is no potential big windfall gain, because the selling price of the finished houses is depressed by the LVT. Even if the developer were given the park for free, there wouldn't be much of a windfall capital gain when he miraculously is given planning permission.

g) The same applies to school playing fields. A lot of schools use the number of playing fields they have as a selling point. That makes the school more attractive to parents; if a school is in demand, they can filter their intake; that pushes the school up the league tables etc etc; and all that pushes up the rental values of homes within the catchment area. So just like with parks, the incentive to sell off playing fields is greatly reduced.

2. "Owners of open spaces will [be forced to] build on them"

For the simple reason that there are very few privately owned open spaces (i.e. public parks), and those that exist are usually owned by trusts set up by Victorian philanthropists and the like and are subject to restrictive covenants. They are effectively public parks as in the previous example. The LVT on such parks would be more or less nil as they cost more to maintain than they generate in direct income.

There are also derelict and vacant sites, usually behind fences and of no value to the public whatsoever. If anything they are a burden (rats, vagrants, fly tipping etc). Like the Battersea power station site for three decades. The owner can afford to leave them derelict because there is no financial disincentive (exempt from Business Rates and Council Tax). If the potential selling price is expected to increase faster than the equivalent return on other investments, the owner has every incentive to leave it vacant as long as possible. The Battersea site was bought for £70 million in 1993 and sold for £400 million in 2006 (the next purchaser went bust, of course). Eleven years later, the project is still not completed.

How land should be used has to be haggled out between owner of the site, the local council and the local electorate. The best uses for derelict sites are some combination of:

a) Clear the buildings and rubble, decontaminate, plant some trees etc and make it into a genuine public open space, enhancing the rental value of surrounding homes, and

b) Grant planning permission for an appropriate development, assess the LVT accordingly and start collecting the tax. If the owner runs up any sort of arrears, he loses his title and the site is sold of to somebody who does want to make something of it.

3. "The Green Belt will be bulldozed/concreted over"

a) Whatever happens, remember that only 3.5% of the UK by surface areas is homes and gardens, and considerably more than half of that is gardens, which have the far more bio-diversity than most farms.

b) The observation that so-called home builders make most of their money from the planning gains uplift applies to greenfield sites as much as it does to the park in the example above. With LVT in place, there would be less incentive to continually expand towns outwards and allow the centre to rot (see Battersea example above). Which is exactly what absence of LVT encourages - you can only bank the massive planning gain uplift once, and if you acquire something a bit run down in a city centre, there's every incentive to just sit back and do nothing.

And there's a trade-off:

c) Here's that little commuter village in its wider context: 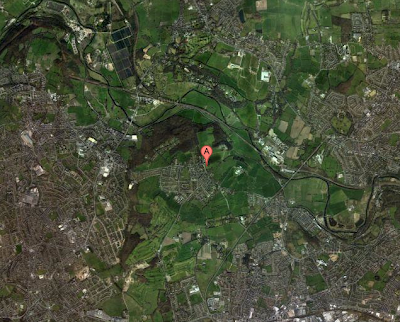 If you really had to plonk down another 60 houses, there's plenty of space to the north and east (where the land is flattest before it slopes away again, down to the river below). So whether the town planner is motivated by concern for his fellow men or just wants to maximise LVT receipts for the council, that is where they would go.

To the extent that this has any negative impact on the rental value of the existing homes (and I'm not admitting it would), it would only be a fraction of the impact of building on the park. Nobody around there really values those fields, it's nice to know they are there is all. I grew up there and was very conscious of the park in the middle, but the fields were just something you saw out of the bus window, and there was one at the end of my road which was very steep and ideal for sledging.

4. "What about churches and listed buildings?"

a) LVT is based on the rental value of each plot, assuming optimum permitted use. So if it's a church, it's a church and would be valued as such, and not as if it could be used to build a ten-storey office block. What is the rental value of a church? It's however much money you can make from it in excess of the vicar's salary and repair costs compared with the amount of money you can make from a comparable church in the least favourable location. In either case, teh value is so low as to be barely worth measuring and the site-only values of a church and the LVT bills will be next to nothing. There is no need for a special exemption for religious buildings.

b) The same argument applies to the church as to the park. The church is a lovely old one dating back to the 12th century (as opposed to the squat Victorian Methodist church in the north-east corner of the park). Perhaps that church actually adds to the rental value of the houses in the village - some of its character magically rubs off on them. So there is no way that the council would ever grant permission to knock it down, even if it never collected a penny in LVT from it.

For example, if planning permission were granted to build new houses overlooking the church and the churchyard, there'd be a premium LVT to be collected from those flats because they are more or less guaranteed that the lovely view from their windows will never change.

c) The same goes for listed buildings; if what the owner can do with them is restricted, then the rental value and the price, and hence the LVT bill, is reduced to what a tenant or purchaser is willing to pay. That said, there are probably far too many listed buildings of no special historical or architectural significance, but this, like planning law, is a different topic to LVT.
Posted by Mark Wadsworth at 20:50