Some people vaguely grasp that house prices are too high, even Tory Housing Ministers have alluded to it. They also vaguely grasp that shifting taxes from earned income to the rental value of land would keep land prices low and stable and simultaneously increase disposable incomes, thus making it easier for people to buy their own homes.

But this idea is anathema to them, so they will desperately suggest things which are superficially attractive but on closer inspection will just make things worse - they will ultimately inflate rents and house prices, and of course primarily benefit the banks.

1. "We can help First Time Buyers with cheap loans or MIRAS"

Over the last five years, both Labour and Lib-Con governments have come up with dozens of different schemes. These culminated in the Funding for Lending Scheme, which is basically giving the banks very low interest taxpayer funded loans to do with as they will; the main impact of this has been to reduce interest rates paid on deposits by about one per cent, from "below inflation" to "even lower than that".

a) We know that a first time buyer is happy to take out a mortgage provided the monthly mortgage repayments are not much more than the monthly rent, so all a lower interest rate does is to push up the price they are willing and able to pay for a home. So these schemes benefit sellers rather than buyers; the total lifetime cost to the purchaser does not go down (he just pays a lower interest rate on a large amount of principal).

b) We know that the biggest hurdle to buying is getting the deposit together and if banks demand higher deposits, this tends to push down the amount which people can take out as a mortgage and so keeps a lid on house prices. So a scheme where the government, or the government and home builders together, only requires a 5% deposit and offers to give borrowers a low-interest loan of 20% of the purchase price, then again, this just pushes up the price which people will pay.

c) MIRAS was the same; it did not reduce the share of income which people spent on mortgage interest in the slightest. It increased the share of income, it's just that people didn't notice, because some of that larger share was paid by the taxpayer, see chart here.

In terms of redistribution the whole thing was pointless anyway, it increased the amount of tax which Middle England had to pay (or reduced the amount spent on welfare and pensions), it was superficially a subsidy to the lower middle (first time buyers) but actually benefitted the upper middle, if MIRAS inflated house prices by a tenth, then the more expensive the house you were selling, the larger the benefit to you. And of course it mainly benefitted the banks.

2. "We can help people onto the property ladder by selling off council housing"

In the short term, all the council house sales did increase the level of owner-occupation, but this short term boost has since reversed itself and the ex-council homes are falling into the hands of landlords and/or the original purchasers (or their heirs) have moved out and are now renting it out. The Daily Mirror did an FOI request and the answer appears to be that around 40% of council housing which was sold off is now in the hands of landlords, some of whom own dozens of such homes, illustrating yet again the natural tendency of land ownership to become more concentrated over time.

The total number of renters (private or social) seems to be a fairly fixed figure, you can shuffle people from social to private, but not from renter to owner-ocupier. 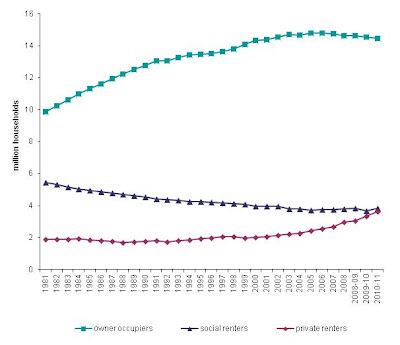 And the banks love this of course; if somebody is renting from the council, how much money do the banks get? None. Even if the first purchaser is given a massive subsidy at the taxpayers' expense, somebody exercising their "right to buy" will still need a mortgage, and once the home is resold for market value, the banks are then cashing in for ever more.

In any event, this suggestion is the opposite of the rather more sensible suggestion that we can make things better by having more social housing (see section Z), which applies with or without LVT.

2b. "What about people who exercised Right-To-Buy and bought their home off the council?"

If in doubt, apply common sense. The payment to buy the freehold or leasehold of a council house was clearly a payment for the brick and mortar value and a prepayment for future "location benefit" arising from the home. The approx. bricks and mortar value at the time of purchase will not be too difficult to establish and the balance can be treated as prepayment of LVT.

The general idea of the council house sell-offs was to allow council tenants to acquire their only and main residence, so if the original purchaser still owns the home and it is his only or main residence, the prepaid LVT element would be amortised over (say) thirty years from the year of payment, and the owner gets a credit/deduction of 1/30 of the amount for the remainder of the thirty years.

3. "Without assets to use as security, people won't be able to borrow money  "

This is a circular argument; a rational person responds that if people had higher incomes after housing costs and lower mortgage repayments, then they wouldn't need to borrow so much money in the first place - to spend on what, exactly? People can either save up beforehand, or they can take out personal loans payable out of their higher net disposable incomes.

And the economy is provably on a dangerous path when people are spending money they have never earned on the back of rising house prices; between 2001 and 2008, people were overspending by 5% a year. And only a minority were doing this; most people didn't remortgage and a minority were overspending by 20% or 50% a year. Once this easy credit dried up, economic growth ground to a halt. See also charts here showing the negative correlation between the savings ratio and house price increases.

4. "I can use the inflated value of my house as collateral to help my children borrow money to buy their own home"

This argument is as circular as the previous one.

If homes were cheaper, then parents wouldn't be under pressure to borrow money to lend to their children to help them "onto the property ladder". The only winners from this are the banks, as per usual, and people selling houses without buying a new one, i.e. a lucky few heirs of Poor Widows and the home builders/land bankers.
Posted by Mark Wadsworth at 20:18