D. Local taxation and the only fair tax is...

Here are another two myths, some nonsensical statements, a meaningless question an one argument that has been superseded by events:

1. MYTH: "I pay for local services out of my Council Tax."

We can dismiss this one straight away, because whatever the logic of it (and it has no relevance to the merits or demerits of LVT), it is simply a downright lie.

We know for a fact that Council Tax currently raises £32 billion a year (before deducting Council Tax benefit), which is only about five per cent of all tax receipts. To be able to make such a statement, you would then have to say what you mean by "local services".

The last time I looked, apart from defence, paying debt interest and maintaining embassies and consulates abroad (and ignoring corporatist subsidies, theft and waste), everything the government does is "local". It spends about £150 billion a year on the NHS and the state school system alone. There's plenty of other stuff on top of that which is clearly "local" (road maintenance, police, law and order, refuse collection, street lighting, social workers etc) which brings the bill to £200 million.

Suffice to say, Council Tax covers barely one-seventh of the cost of such "local services".

And you could just as well argue that welfare and pensions spending are local services, because they are paid to people who all live somewhere, and wherever they live is "local", and every bit of land benefits from the fact that we have these non-local services (defence, paying debt interest), in which case Council Tax only covers a twentieth of the cost of "local services".

2. MYTH "The UK already collects more tax from property than any other OECD country"

The OECD's latest report (2015, overall very much in favour of taxes on land values) says :

The size of the property tax take varies strongly across countries, both in terms of percentage of total tax revenue and in per cent of GDP (Figure 1). Overall, its significance is modest. Across the OECD, taxation of immovable property makes up around 2½ per cent of the total tax take and a bit more than 1% of GDP. Countries with a high property tax-to-GDP ratio include the United Kingdom, Canada and the United States, while the ratio is almost nil in countries such as Luxemburg, Greece and Mexico. The property tax is more prevalent in Anglo-Saxon countries…

The OECD takes a very wide view of what constitutes a tax on immoveable property. It is true that the UK's Business Rates is very high by international standards, as is Stamp Duty Land Tax, but Council Tax is quite low.

If you add these together, the UK is at the top of the table (it wouldn't be if Hong Kong and Singapore were included), but out of the £80 billion-odd in such taxes collected in the UK, how much is actually an annual tax on the rental value of land?

- Business Rates (£30 billion), is quite similar to LVT (and high by international standards).
- Stamp Duty Land Tax (£14 billion) is a tax on certain transactions in land and buildings, it relates to land values and is highly progressive but is not proper LVT (it is a very crude LVT payable in advance).
- Inheritance Tax and Capital Gains Tax (£14 billion) are general taxes which apply to lots of other things than land. A fair chunk of estates and capital gains affected relate to land values, but these are not LVT (they are a very crude LVT payable in arrears).
- Council Tax (£32 billion before rebates) is closer to a Poll Tax than LVT (although administratively could easily be made much more like LVT). It varies depending on what a home was (or would have been, had it existed) worth in 1991. In 1991, house prices were much flatter around the UK and values were closer to the "bricks and mortar" value, so you could say that it's a tax of about £300 for each room in a home, if you have more than nine rooms, the rest are tax-free.
- The OECD ignores subsidies to land ownership, such as the £10 billion paid to private landlords as Housing Benefit or the £4 billion paid to owners of farmland (a kind of negative LVT).

So actual quasi-LVT (Business Rates) is less than 5% of UK taxes collected, not the 12.5% given by the OECD (tables).

The amount of quasi-LVT (ad valorem annual property taxes) collected in the USA and Canada is much higher in the UK; the bulk of their property taxes are annual taxes pro rata to the value of each home, with no upper limit in most states (some apartments on Manhattan cost over $100,000 a year); and their Stamp Duty Land Tax equivalents are much lower.

3. "The only fair tax is a Poll Tax, income tax or sales tax/VAT"

The distinction between 'local' and 'national' services is highly artificial, to all intents and purposes, the UK has one single national tax-raising system; even supposed 'local' taxes like Council Tax or Business Rates are dictated by UK-wide rules (these are diverging slightly for Scotland). Simply putting the word 'local' in front of a tax or earmarking it for 'local' spending adds nothing to the merits or demerits of the tax.

Land Value Tax comes out the best when judged by objective criteria, with income tax in second place. 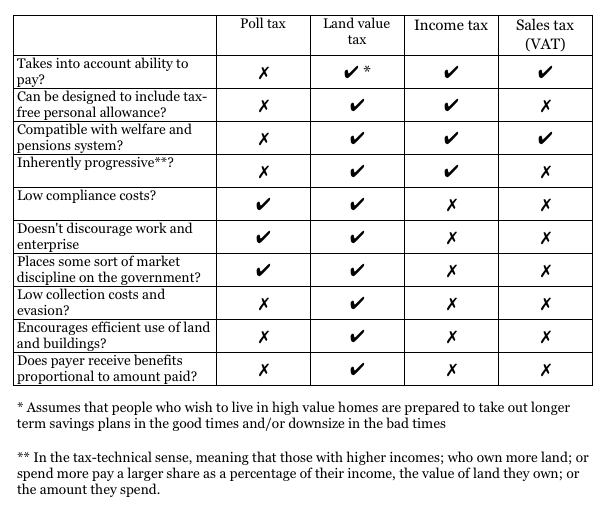 The whole topic of local government finance is currently nigh impenetrable. It is a mixture of a small amount of locally collected national taxes (Council Tax and from since 2013, a proportion of Business Rates) and hundreds of different adjustments to and fro to say how much money each council, local NHS, local education authority etc gets from central government out of national taxes. And of course there are different layers of local government: town and parish councils, local boroughs, county councils, unitary authorities and regions such as Scotland, Wales and Northern Ireland.

Officially, only about one-quarter of total government spending is "local", but you could easily classify two-thirds of UK government expenditure as "local", i.e. anything that can reasonably said to be spent in a particular area. So in the wider sense, this includes an NHS hospital, a state school or university, roads, the local police, refuse collection, Housing Associations and of course pension and welfare payments to people in an area. Truly "national" stuff is only defence, immigration control, foreign embassies and consulates, debt interest and so on.

If some councils decide, for political or ideological reasons, to collect less than what they are entitled to collect and cut back on "local" spending accordingly, well, that is their decision; their grants from central government would not be increased to make up the shortfall. Clearly, central government grants would have to be re-assessed regularly and tapered gently so that local councils are incentivised to improve their areas as best they can, because they can keep any increase in rates receipts in the medium term. No system is ever going to be perfect but you could hardly make it worse than it already is.

5. "We have to have VAT because the EU says so"

This was quite true, but now that the UK government appears to have accepted the narrow majority for "Leave" in the 2016 Referendum, we are free to reduce the headline rate and preferably scrap VAT altogether.
Posted by Mark Wadsworth at 21:06