E. LVT is a tax on aspiration

All of the following claims can be debunked by applying logic and looking at hard facts:

As regards the fourth bullet point, see also Landlords will pass on all the tax to their tenants. It's either one or the other but it can't be both, and in fact it's neither. The two arguments cancel out.

No it's not. Income tax and PAYE are taxes on "aspiration". The point of earning money is to have a nice life. Having earned some money, people want a nice house, a nice car or two, nice holidays etc. All of these things cost money; shifting the tax burden from output and employment reduces taxes on aspiration, it does not add to the cost of buying a nice house, and it reduces the cost of cars and holidays.

The Home-Owner-Ist system is a pyramid scheme. So of course the people at the top get big payouts, that is what people really aspire to, winning the land price lottery. And they are trying to sucker people into paying their entry fee. By definition, only a small minority can be winners under the scheme and everybody else is paying for their trickle up winnings. Unfortunately, it is impossible to opt out of the scheme - if you don't own land then you are paying rent to somebody who does, so a lot of people are prepared to overpay in order to get onto the pyramid.

So who are the people who are doing the "aspiring" here? It is the people outside looking in. The people at the top aren't aspiring to anything at all, they are just sitting on their handsome source of unearned payouts and can sit back and relax.

And who is doing all the work? It is of course the people outside looking in or the people scrambling to get on or climb up the pyramid (it is impossible for everybody to be climbing up, if we were all landlords, there'd be nobody left to be a tenant, but it doesn't stop them trying).

So a more accurate statement is roughly as follows: "Taxes on output and employment are taxes on aspiration. LVT is a tax on those people who can't be bothered going out to work".

LVT would keep house prices low and stable, which would in itself encourage real saving (there'd be no debt-fuelled land price speculation) and if people want to stay in the same house all their lives, they would have to put more money aside to tide them over during retirement. 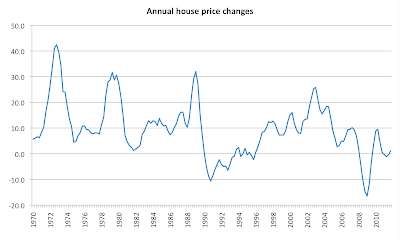 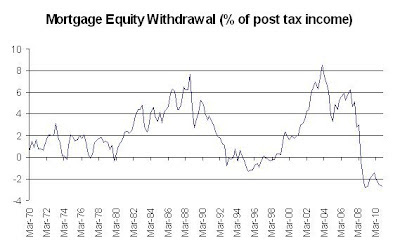 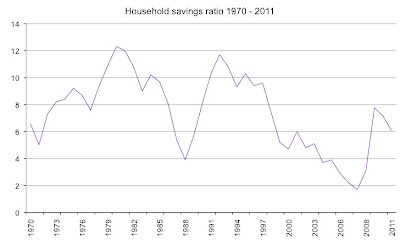 Data from the ONS.

Research by Robert J. Shiller, who made his name warning of irrational exuberance, and his colleagues Karl E. Case and John M. Quigley, published by the National Bureau of Economic Research, confirms how house prices drive consumer spending. Their numbers relate to America, but they would undoubtedly also apply here; the authors discovered that changes in house prices have a larger impact on spending than changes in share prices, and that increases in property prices boost consumption by more than crashes cut it.

They found that an increase in real, inflation-adjusted housing wealth, of the sort seen in the US between 2001 and 2005, pushes up household spending by 4.3 per cent in total. A housing crash of the sort seen in 2005-2009, slashes consumer spending by around 3.5 per cent. There are usually two ways in which house prices impact spending: home owners feel richer; and they are able to extract equity by remortgaging or downsizing their homes.

A household "saves" when it earns more money that it spends. If it starts spending more without earning more (i.e. on the back of a credit bubble) then that is quite simply the opposite of "saving".

c) The Home-Owner-Ists have another stealth tax on savings, which is inflation and negative real interests, which transfers wealth from cash savers to banks, borrowers and land owners. With LVT in place, there would simply be no incentive for the government to stoke inflation and depress interest rates.

And land itself is not "savings", how can it be, it is just there.

With LVT, land will be (from the point of view of the household) just another item of consumption. If people are really thrifty, they will consume less land, unlike under Home-Owner-Ism where trying to own as much land as possible is seen as "savings and thrift". All these people are doing is collecting rent and pushing up the price of land for everybody else, i.e. making it even more difficult for other people to build up savings. The net impact of Home-Owner-Ism on real savings (in the sense of households deferring consumption to a rainy day) is very negative indeed.

d) A lot of the Home-Owner-Ist wailing when the Mansion Tax was suggested was about Poor Widows In Mansions who had seen their homes rise in value for reasons beyond their control (thus contradicting the claim that Landowners create their own land values).

3. "LVT will increase the cost of buying a home"

No it won't. It will be much easier to buy a house.

a) With VAT and NIC gone, potential FTB's (who will save more from the reduction in taxes on output and employment than anything they pay extra in higher rents) will have much higher disposable incomes to start with.

c) In the USA, "property taxes" vary widely from state to state and from county to county within each state. Published figures on property taxes, house prices and earnings in New York State show that $1 extra on the property tax pushes down the purchase price of a home by $17.

d) With a twenty-five year mortgage, the total repayments are double the amount of the original loan. So over the mortgage term, the purchaser saves $34 in mortgage repayments (privately collected tax); saves $25 in income tax and pays $25 in property tax. So by the end of that period he is well ahead of the game. What the savings (or additional costs) are over the rest of his life depends on how many years he continues working after that, what his retirement income is and so on.

e) If a tax on home ownership increases the cost, then a direct subsidy to home ownership would reduce the cost, wouldn't it? The UK had such a subsidy ("MIRAS", tax relief for mortgage interest) which was phased out during the 1990s. So if the subsidy had reduced the cost of buying a home rather than just pushing up prices, then the cost of buying a home (as represented by mortgage interest as a proportion of salaries) would have gone up once MIRAS was phased out.

Only it didn't, did it? See chart 3 on page 5 of the recent CML report on 'Affordability and first-time buyers' (pdf): 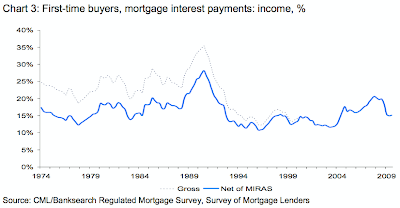 4. "Tenants will end up paying nothing. They’ll always vote for increases."

a) Private tenants (20% of households) are already paying LVT of course, it is just that their landlords are pocketing it rather than paying it over as tax (thus enabling other taxes payable by tenants to be reduced). So yes, tenants have nothing to lose and everything to gain by voting for LVT increases. This would also push down house prices, making it easier for them to become owner-occupiers.

b) For social tenants (17% of households) this is a bit of a two-edged sword. Logic would dictate that social rents and LVT are pretty much the same thing, so LVT increases would mean higher social rents.

c) This argument completely overlooks the fact that we live in a democracy and landowners are in a majority; 63% of households are owner-occupiers (half of them with, half of them without a mortgage) and a few per cent are also landlords.

d) We know that all the major political parties in the UK make a great show of promising that they will increase Council Tax by less than inflation, i.e. is being reduced in real terms. Even tenants go along with this because they don't realise that any Council Tax increase will always push down rents in equal and opposite measure.

e) But if tenants aren't paying the LVT (which they would be, directly or indirectly), then who is? Their landlords, of course! If landlords think that LVT takes too much of his rental income, then he is free to sell his rented homes and invest the proceeds more profitably elsewhere. And to whom will he sell them? To the sitting tenants, of course. So if tenants voted for increases, we'd end up with fewer tenants and more homeowners and it would all find its equilibrium within a couple of years.

5. "Homeowners will end up paying all the tax"

This is clearly complete nonsense; most homeowners will end up paying less tax.

a) If you try out the online app, you will see that most working owner-occupiers will end up paying a lot less in tax. The only ones who would pay more are those with particularly low earned income relative to the value of the house they own, i.e. Poor Widows In Mansions, which we have covered elsewhere.

Of the majority of UK adults who are owner-occupiers, a majority are still in work and they would nearly all benefit. Younger owner-occupiers will benefit most (because they will save most tax in the long run and are more likely to want to trade up in future) and those nearing in retirement will vote for the status quo (having already banked the tax and rent savings over their lifetime, they are unwilling to give any back), unless of course they are enlightened enough to take their children and grandchildren's interests into account. Unfortunately, most of them aren't.

b) Three-quarters of privately owned housing is owner-occupied and one-quarter is rented out.

Seeing as the LVT would be the same whether a home is owner-occupied or rented out, homeowners would be paying three-quarters of the LVT collected from privately owned residential land and landlords/tenants would be paying the other quarter. The LVT payable by social tenants would be included with their rent. You might as well argue against income tax or insurance premium tax or air passenger duty on the basis that these taxes are largely borne by homeowners. Well of course they are because homeowners are (still) a majority of the population.
Posted by Mark Wadsworth at 21:05